Miners wrap up 2018 on a winning note

It’s been 87 days since the first puck drop of the season. In that time span, the Miners have tallied 128 goals, including 44 power play goals and 9 short-handed; spent 40-plus hours practicing and traveled 3,095 miles earning them the number 15 slot in the West Region of ACHA. Overall, the Miners hold a 12-1-1-1 record, 7-1-1-1 in conference ranking them T-2 with East Texas Baptist University.

When matched up with the rest of TCHC, Miners lead the league in goals per game, power play percentage and penalty kill percentage. In other words, the Miners have set themselves up in the perfect position to push for the top spot in the league come second semester.

With a TCHC championship on the line and a trip to the Western Regional Tournament down the road in Phoenix, the Miners have one goal in mind, improve. “I think our goal is pretty clear in the dressing room, it’s nice to be ranked where we are, but we know that we can improve on that,” said goaltender Angus Campbell. “We have a chance to change it right when we get back from break and I’m excited to get back into it already.”

Currently, two Miners rank in the Top 10 in ACHA, forward Austin Simpson ranks third with 57 points, while forward Carlo Wittor sits in 10th place with 47 points. Both have been explosive on the score sheet for the Miners with 21 goals each so far this season. “I think both of them are happy with where they are at currently but at the same time feel like they have room to grow in all areas as players,” said Coach Herman. “They have been big components of our success and they will be relied upon going forward as well.”

Simpson has recorded three hat tricks and Carlo Wittor has two of his own, as well as now holds the club record for most goals scored in a game when he scored seven goals against Dallas Baptist University, November 30, 2018. That record previously held by Austin Simpson, Jeramy Rezaeepour and Lukas Znosko who all scored a club-high four goals in one game.

Freshman netminder, Angus Campbell, is in his first season in orange and blue and when looking at the stat sheet, he’s had quite the impressive start. With a .921 save percentage, averaging 2.17 goals against a game, Campbell has earned a Top 25 spot in ACHA and is second in TCHC in wins and goals against. “My role is to give the team a chance to win every game,” said Campbell. “It’s a very good feeling to have my teammates have my back every game.”

Another plus for the Miners this season has been the solid group of veteran players that have returned for the Miners. “Having a group that has found success in TCHC and have gone to regionals is huge for this club,” said Coach Herman. “Their leadership and experience is definitely something we can use going forward.

Twin brothers Matt and Jon Sanca are in their third season with the Miners. Playing in the top line with Dominik Taras and earlier in the season Noah Vanderzwan, the Sanca’s have played a valuable role for the Miners. Matt currently ranks fourth in the club with 26 points and Jon has 18 points. Each are averaging about one point a game and can always be counted on to come through for the Miners in tough situations.

Second-year forward, Noah Vanderzwan, has a new leadership role off the ice as Team President and has used that opportunity to push his role on the ice. “Being the president and a veteran on the team, I can lead guys on how to play against others in practice and in games,” said Vanderzwan. “I believe I’ve lead this team in different ways and that has helped the team.” Vanderzwan tallied 23 points the first semester and continues to push and be a valuable asset each game and does what he can to put the Miners in the win column.

As the saying goes, winning is fun and the Miners have done plenty of that. Miners remain undefeated on home ice and only have two losses on the road. So what can the Miners attribute to their success with a team that welcomed plenty of new faces this season? “I think everyone would agree that we are getting there,” said Coach Herman.

“I think we started off a bit slow. We were still getting used to each other...but our last games against DBU really proved how much we’ve grown as a team,” said Vanderzwan.

With plenty of hockey left to play in the season, the Miners still have plenty of challenges and tests to come their way. The second half of the season UTEP will see Texas A&M, University of Texas and Texas State at home. With a lengthy four-game road trip in Dallas against Texas Christian University and North Texas. Texas A&M and the University of Texas kept the Miners from having a perfect season. “Both A&M and UT have been tough opponents for us since the start of TCHC,” said Coach Herman. “Games are always close, fast paced and hard hitting. We aren’t expecting anything less.” 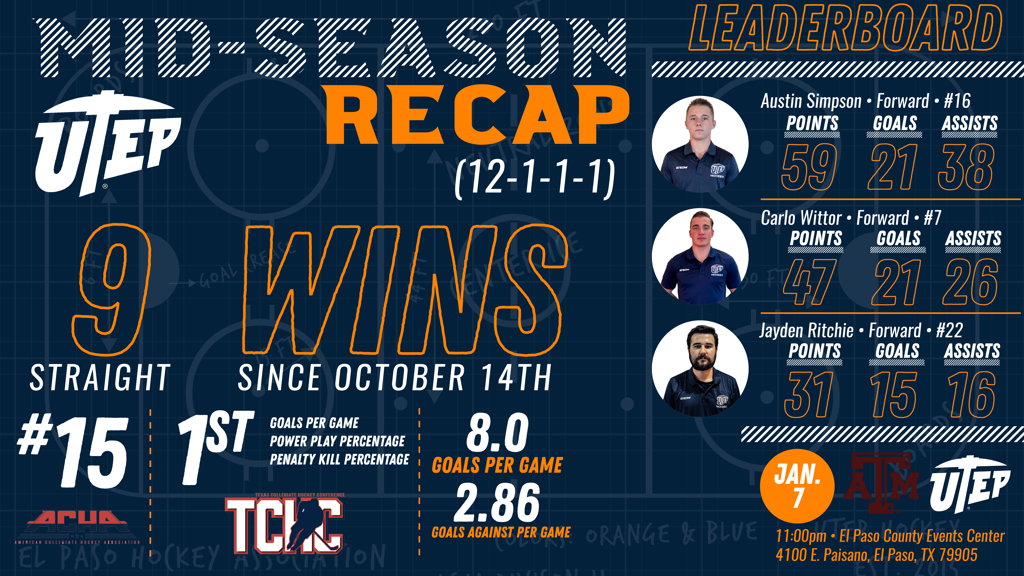