Living with Type 1 Diabetes is a daily challenge, Freshman Forward Fabian Perez understands the importance of keeping his blood sugar levels in check during a hockey game. 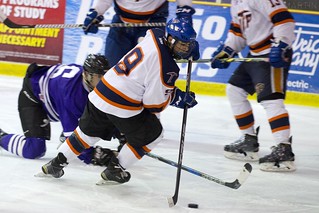 Since being diagnosed at 15, Fabian Perez has worked to find a balance of playing the sport he loves, keeping himself healthy, and educating those around him about a disease that affects so many Americans each year. Once a feeling of burden and need to feel normal, Type 1 Diabetes has now given Fabian a new confidence in life.

In support of National Diabetes Day, Fabian shares his story of his diagnosis, controlling his blood sugars while playing hockey and how he plans to continue to be an advocate for diabetes awareness.

Tell us about your diagnosis.

I had been sick with the flu and strep throat, yet, I had dropped a lot of weight. I had gone from 160lbs to 96lbs. I went to several doctors to try and figure out what was wrong with me and every doctor said I was perfectly fine. Yet, I looked like skin n bones. My mother refused to give up. That night I had felt as if there was elephant on my chest. I surely thought, I was not going to make it. I went to school the next day, like normal. At the start of class, I was called to the office, I remember seeing my mother’s face of horror as she didn’t speak. She hugged me so tight and cried. We made our way to St. Francis Hospital in Memphis, TN. We signed in and immediately were called into this big room where I met Dr. Latif, the nutritionist, and his assistants. They sat me down, my mother grabbed my hand and Dr. Latif said, “Mr. Perez you have Type 1 Diabetes, this means you do not produce any insulin”. After that my mind went blank, I truthfully cannot tell you anything he was telling me. I was in so much shock of the thought of being sick for the rest of my life. I wouldn’t be “normal”. The next event within that hour was I needed to give myself insulin, which I was petrified of. His assistant had told me it was all or nothing. She first demonstrated on how to administer the medication on a pillow. Then, she handed it over and said to do it to myself. I starred at her as if she was on drugs. I knew, I had to do it to live. It had taken a lot of me just to do it, as she said I had to know how to do. It hurt so much then, I would cry during every shot and I had felt as if everyone had been staring at me as I left the doctor’s office.

Growing up with diabetes during high school was a mental struggle. I didn’t like taking my medication where everybody could see me. I would lock myself in a restroom stall. It was embarrassing coming into class late because I had to check in with the nurse. It wasn’t until I moved to El Paso that I felt comfortable in my own body. I didn’t care if people saw me check my blood, wear a pump, or take insulin shots. I learned to love myself and my condition. 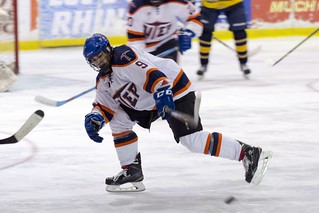 How many times a day do you check your glucose?

Do you take insulin? How many times a day?

How does having diabetes effect you when playing hockey?

At first, I felt as it affected me a lot as I had not been used to playing with it. I have made the mistake of playing while my blood sugar was too high and feeling as if I’m moving fast but in all reality moving as slow as a turtle. Or my blood sugar being low and sweating and not being able to talk. I then needed to eat glucose tabs which would cause me to miss a shift or two. Which I would hate. Now, I have learned how to manage my blood sugar level more when playing. Now in between periods I eat some sort of carb source, just 10-15 grams, so I can keep myself from falling under.

Are there any special routines you have while playing hockey?

My special routine starts with just checking blood sugar before and after games. While on the ice I typically go off on how I feel physically and in between periods I like to eat.

I see that one of your hobbies is lifting weights, does this help control your diabetes?

Yes! I love lifting weights! Lifting and staying healthy has been a great portion of controlling my diabetes. Helps regulate my blood glucose and use whatever carb source that I have left remaining in my body. Also, it allows me to eat more carbs without using as much insulin if I didn’t work out.

My daily diet mainly consists of protein and carbs on an equal percentage since I need the carbs for energy to perform on the ice and in the weight room. I typically start off with some eggs and rice or oatmeal. Then, I will either eat some prep meals or a healthier decision when I do eat out. I’ll be the first one to say, I do love Coke Zero and my brownies. Those are easily in my diet at least once a week.

Are there any particular misconceptions about diabetes that annoy you?

There are a few misconceptions I really dislike. As I have been told by people that if I had eaten so much sugar, this could have been all avoided. When my diet had absolutely nothing to do with, it just happens. Another one would be when people ask me how could I have diabetes, due to not being overweight. Which not every diabetic has a common stereotypical figure to be any type of diabetic. It is those uneducated, who say the most ignorant comments about my condition.